Methods to model topics for documents

Scientific advancement and improvement in living standards and education has historically resulted in information explosion. With the advent of the internet, pace of more accessible information had become ever more accelerated. Therefore tools to find and discover the information we seek is of utmost importance.

Topic modelling is a method to infer the thematic structure of a document such that automatic tools to organise, search and summarise information can be devised. Documents are generated as a collection of topics. These topics are conveyed in paragraphs, sentences and words without specific topical structure being drawn out, or specifying what topics are covered by a given document. Human reading a document can intuitively ascertain what the topics are using the prior worldly knowledge. Topic modelling attempts to give this ability to an algorithm such that large amount of documents can be processed, organised and be made available in the form of search, for human consumption.

Topic modelling is a statistical method to discover the topics that occur in a collection of documents. The modelling algorithms generally require no annotated data rather topics emerge from the data itself. (There are some supervised algorithms (LabeledLDA) in recent times to exploit the tagged documents, specially social bookmarking websites (Ramage, D., Hall, D., Nallapati, R., & Manning, C. D. (2009, August)).

The advantages of topic modelling allows the following to name a few:

Each document in a corpora can be thought of as generated by the following process:

The goal of the LDA topic modelling is to infer these distributions from the observed documents.

Main advantage of formulating LDA as a probabilistic model is that it can be used as a component in a more complicated modelling pipeline. LDA has been extended and adapted in many ways. LDA makes some statistical assumptions about the corpus. One such being the 'bag of words' assumption, where it assumes invariance to the order of the words. This is an unrealistic simplification but reasonable if the goal is just to find the semantic structure of a document (Blei, D. M. (2012)), but makes it unsuitable for language generation tasks, such as summarisation. Another assumption of LDA is that it is invariant to the order of documents. This may be unrealistic when analysing a collection of documents that has a specific order, for example, legal documents that has a significant reliance on the order or in situations where there's a need to analyse the changes of topics over time. One more assumption being that the topics are known and they are fixed. Also, LDA assumes no correlation between topics, but for example, a document about rocket propulsion is more likely to contain topics of physics or chemistry than gardening. This type of correlations are allowed in PAM.

Variations on LDA have been used in other areas unrelated to natural language processing, such as bioinformatics (Pinoli, P., Chicco, D., & Masseroli, M. (2014, May)) and image labelling (Fei-Fei, L., & Perona, P. (2005, June)). In the case of image labelling, image was assumed to be the document and small patches of the image to be the words.

PAM is an improvement over LDA, where the latter fails to capture correlations among topics. In reality topic correlations are very common and being unable to detect the correlations put LDA at a disadvantage with regards to performance, ability to discover large number of fine grained and tightly coherent topics. LDA can also combine arbitrary sets of topics which yields nonsensical results (Li, W., & McCallum, A. (2006, June)).

In their paper 'Pachinko Allocation' (Li, W., & McCallum, A. (2006, June)), describe experiments where PAM is evaluated against LDA for a topic discovery task. The following descriptions of the experiments are extracts from their paper.

In this task, they used randomly selected 1647 research paper abstracts from a large collection as their dataset. PAM was configured to have 4 level structure, where it includes a root, set of super-topics and set of sub-topics. As LDA can be modelled as a three level hierarchy, sub-topics in the PAM structure were treated as same as for LDA. This produced a hierarchical topic set (50 super topics,100 sub topics) for PAM and for LDA, 100 topics. Resultant topics (represented by their word distributions) anonymised and randomised and presented to 5 human judges to be evaluated on the semantic coherence and specificity. The results summarised in Table 1 shows that, PAM had more topics better judged than LDA.

In addition to the above, they conducted a likelihood comparison between PAM, LDA and other similar methods. In this experiment they learned the model from a training set and computed the likelihood for a test set. Training and test sets were split 3:1 ratio from the same dataset as before. They used a nonparametric likelihood estimates based on empirical likelihood (EL) (Diggle, P. J., & Gratton, R. J. (1984)). They first generated 1000 random documents from the trained model and estimated a multinomial distribution from each sample directly from the sub topic mixture. Likelihood of the test document was calculated as its average probability from each multinomial. Results showed that compared to LDA, PAM always produced higher likelihood across a range of sub-topic numbers (Figure 1). LDA performance peaks at 40 topics and PAM at 160 sub-topics, thus PAM can support larger number of topics. 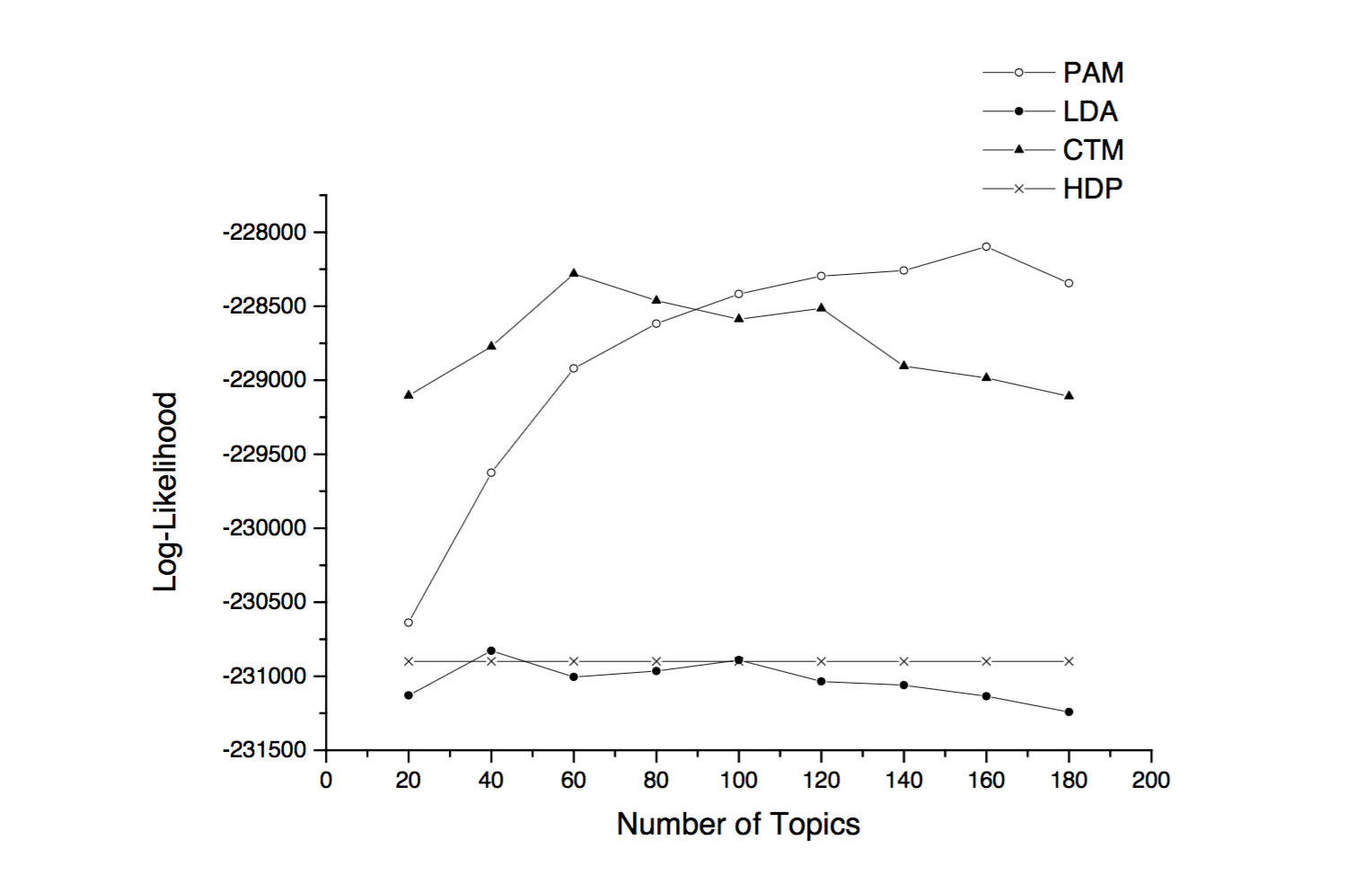 Another comparison made was in document classification. The experiment was to classify documents from 20 newsgroups containing 4836 documents into 5 classes. As before, training and test sets were split 3:1 ratio. Models were trained for each class and likelihood was calculated for the test data. Table 2 shows the classification accuracy, and according to the sign test, improvement of PAM over LDA is statistically significant (p-value < 0.05).

In conclusion, PAM has advantages on LDA on quality of the topics as it is more expressive and has more realistic assumptions. Compared to PAM, LDA is much simpler and as evidenced in the NLP research, large number of extensions have sprung up. LDA can be thought of as a good basis for further research into topic modelling.

Deep neural networks are increasingly used in a wide variety of problems with surprisingly good results. Success of this is largely due to the exploitation of large amount of data and comparable amount of processing power. In the paper 'Modeling documents with deep Boltzman machine' (Srivastava, N., Salakhutdinov, R. R., & Hinton, G. E. (2013)) describes such an application. Topic modelling is a challenging area, and no single method completely captures the complexity of real world language representations. The advantage of deep networks are that, they could be trained to contain a multitude of the techniques that can be automatically selected from the data itself.